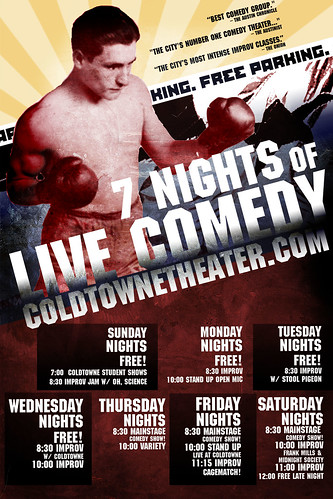 Hey guys, now’s as good a time as any to go ahead and formally announce some big-time schedule changes happening at ColdTowne Theater. Austin comedy nerds rejoice! We’re moving to seven nights a week of live comedy as well as offering a broader range of special events and runs of shows with better production values. We’re also using this opportunity to institute a PAY WHAT YOU WANT pricing structure for our off night shows.

Don’t panic! You can totally get in for free if you’re super broke and we totally won’t guilt you or anything. Asking for a dollar or two from the people who can afford it will enable us to produce better shows and more of them!

Speaking of better shows, the gigantic new schedule will be overseen by recently appointed Artistic Director, Josh Krilov. Joshua Krilov, a New Orleans native, earned a Bachelor’s degree in Radio, Television & Film from UT at Austin and has since worked on television shows (The Real World: Austin, Friday Night Lights) and on feature films, (Gretchen, There Will Be Blood). He began his improv career as one of ColdTowne Theater’s first students and has since appeared on stages all over Austin and in festivals all over the coutnry. He is a teacher at ColdTowne and regularly performs with Stool Pigeon and his two-person troupe, Billy Icon. Josh produces and stars in ColdTowne Theater’s wildly popular Night Show. He also appeared in the mainstage sketch revues Eye for an iPhone and Shanty Town Lake.  Keep reading, Austin, for the full fall comedy preview:

BAD BOYS PRESENT: SIN
AUGUST, Thursdays, 8:30
Join Bad Boys as they mine sin for all of the laughs it can yield. What causes people to commit adultery? Overeat? Cut you off in traffic when you’re late to a movie? Bad Boys will get to the root of these daily transgressions and then blow them out of proportion to discover the laughter in what truly causes people to be awful to each other. You’ll wish all comedy could be this divine.

FAMILY TIDES
SEPTEMBER, Thursdays, 8:30
Coldtowne Theater wants you to bring your baggage. Watch as Family Tides takes your dysfunctional family and shows you just how funny they really are. Share your story or just watch others share theirs. Laugh as this mischievous group explores what it really means to be dysfunctional. Need family therapy? We’ve got couches… and popcorn

AFTER SCHOOL SPECIAL VICTIMS UNIT
SEPTEMBER, Fri and Sat, 8:30
Part children’s show, part network procedural drama, ColdTowne Theater’s newest mainstage sketch comedy revue plays in the space between parents and kids when neither really gives a shit about the other.

MIDNIGHT SOCIETY: HALLOWEEN SPOOKTACULAR 4
OCTOBER, Fridays, 8:30
For the fourth year in a row, Midnight Society presents a cross section of Halloween themed sketch comedy that will adress important questions like “Is it racist to fear Frankenstein?” This month’s run will feature special discounts for best costume and other spooktacularness.

STAG COMEDY PRESENTS… JERK PARADE
NOVEMBER, Fridays, 8:30
Stag’s last run of sketch comedy shows sold out the Drafthouse! We’re honored to have them for an entire month in November, tearing up our quaint 40 person venue! Stag featured members of Master Pancake Theater, Hot Property and Mascot Wedding and are one of Austin’s premier comedy troupes!