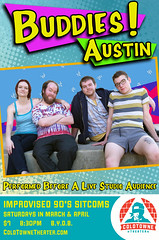 Are you experiencing Full House withdrawal? Did the loss of Mr.Cooper leave you feeling helpless and alone? Well, it’s time to dust off those over-sized overalls (with one strap hanging down of course) and hang those WHAM! posters back up because this spring, ColdTowne’s TGIS Lineup is taking over Saturday nights with a double feature of Improvised 90’s Sitcomedy!

Come be a part of a live studio audience at COLDTOWNE STUDIOS for these two back-to-back improvised sitcoms straight out of the 1990’s! Complete with applause sign, canned laughter, and even some special guest cameos, ColdTowne’s TGIS Lineup seeks to honor the spirit of your favorite prime time TV shows from the past.

Each week begins with an entirely new and entirely improvised episode of Boy Greets World, complete with all of the awkward high school growing pains, and the kind of timid teenage love that a Disney-owned network would feel good about piping into suburban living rooms.

Then stay tuned for an episode of Buddies Austin! Based off of an audience suggestion of “the one where,” the cast and weekly special guests will improvise an all new episode of farcical occurrences and awww-shucksical misunderstandings.

This is the fourth season of a show that previously helped launch a scene in Dallas in May of 2010. The newly opened (and still righteous) Dallas Comedy House was the first home of Buddies where instructors of the theater put together a show based on their mutual love of the now-classic sitcoms on the 80’s and 90’s. Cody Dearing spearheaded the efforts, drawing heavily from a late night show called “Guy Friends” he had seen while training at IO in Chicago. “Buddies!” became a long running hit in Dallas that itself inspired spin-offs of the buddy cop and college years variety.

Now living in Austin, Dearing is at it again, this time enlisting the help of Eric Rutherford who previously worked with the cast of Guy Friends Chicago to help shape their show. Dearing is also pairing with director Courtney Sevener to bring her loving homage of a show entitled Boy Greets World to life. BGW tips, nay, gives its hat to the timeless elements of a certain show following a certain curly haired boy and his friends through their adolescence. Ever a lover of all things 90’s, Sevener & Dearing are teaming up to bring audiences a Saturday Night Line-up that will have even those who aren’t at times overwhelmed with nostalgia for the 90’s (or perhaps even appropriately religious) thanking God for Saturday nights.

Join the fun in March & April at ColdTowne Theater, 8:30pm on Saturdays. Tickets are $7 for general admission, and will be available to purchase in advance HERE.