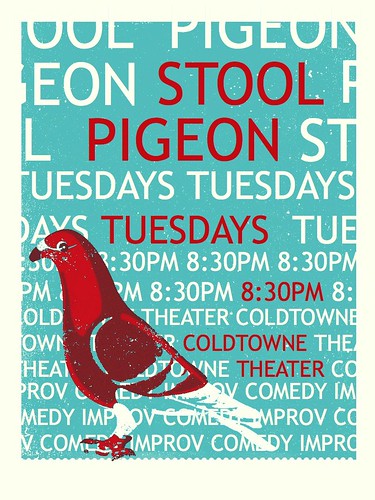 The cast of Stool Pigeon reads like a Who’s Who of ColdTowne improv, a collection of our most prodigous graduates and teachers. Each week, a special guest will be the “Stool Pigeon”. The pigeon relates several stories from their (real) life, providing a bevy of details and thematic do-dads for the others to take and run with in an all-out improv set. You never know who’s going to show up to tell stories! Definitely not one to miss.

The Austinist’s TrueCraig on Stool Pigeon: “…that shit’s mad-impressive-pressure-awesome. And what they’re doing for the cultural development of our fair city shouldn’t go unnoticed.”

Austin’s second longest running improv show, Stool Pigeon, is entering it’s fourth year and announcing some major changes. First, the show is moving to 8:30pm on Tuesday nights in a “Pay What You Want” show.