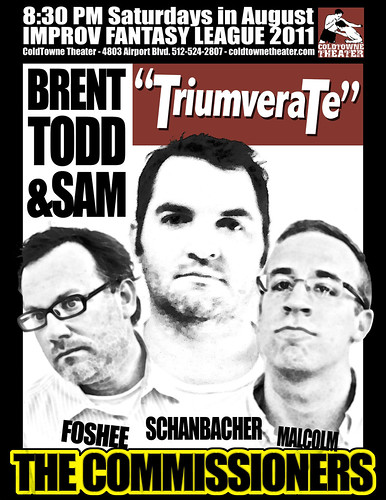 Saturdays in August! Mom’s apple pie. The Lincoln Memorial. Making out. None of these things are nearly as quintessentially American as a good old fashioned football. The old gridiron. The pigskin. Two teams of hot sinewy dudes matching wits on a field of battle. And nothing’s more quintessentially hilarious than people fantasizing about playing football. With that in mind, ColdTowne Theater has decided to combine it’s love of sports, arbitrary competition and hilarity into a month of football-style improv comedy competition, replete with drafts, free agents, referees and tailgating.

Every Saturday Night in August at 8:30pm, three teams will compete to advance in a tournament style competition. At the top of each show, the audience will have the opportunity to bid actual money on free agents for their favorite teams and to assign mystery improvisers. What does that mean? Last year, someone got forced to do an improv show with a real live puppy. At the end of each show, the audience will vote for their favorite team who will then move on to the next round. The finals will happen on August 27th, and will be followed by a ticker tape parade. (We’re not kidding.)