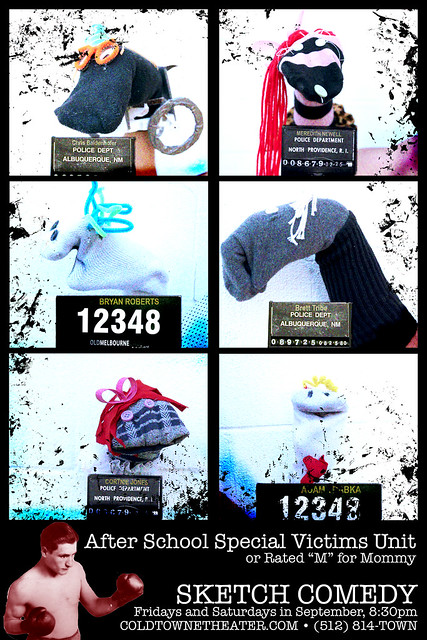 Murderers and con artists. White collar fraud and suicide bombers. Bernie Madoff and Rupert Murdoch. There’s a crime wave sweeping the nation, and it has absolutely nothing to do with any of those things.

The real crimes against humanity are being perpetrated every day by the very people that birthed you. Your parents are guilty of turning you into a neurotic, self-obsessed basket case with commitment issues, and you will do the same to your kids in a never ending mobious strip of dysfunction. Never fear! ColdTowne Theater is on the case.

After School Special Victims Unit blends the manic, primary-colors of children’s programing with existential sadness of parenthood to create a comedic blend of sketch comedy, music and satiric nihilism. Featuring a kids show written by phobic parents, grossly inappropriate puppets and more terrible career advice than you can shake a stick at, After School Special Victims Unit promises at least several uncomfortable moments with your mother and father.

The ColdTowne Theater is Austin’s main stage for alternative comedy, with improv, sketch and stand up shows Thursday through Monday, featuring the smartest, brightest, and hardest-working comedians in Central Texas. ColdTowne’s resident comedians are three time winners of the Austin Chronicle’s “Best of Austin” Readers Poll for “Best Comedy Group” and have appeared all over country at festivals, on college campuses and at house parties. Tickets are available at coldtownetheater.com and group rates are available by calling (512) 814-TOWN.