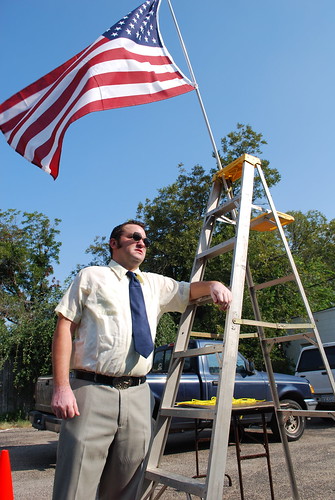 The claws came out last Friday night in the second preliminary round of the Improv Fantasy League! The Immutably Misanthropic McMeullers of Middle Ridgetop faced off against  The Murchison Middle Schoolers and  The Bee Cave Honey Boo Boo Children of Str8 Death and emerged victorious!

At the top of the show, The Middle Schoolers won the right to pick the first free agent and determine the run order of the show. The free agents – recent NYC transplant Ben Masten and newly minted NYC resident James Patrick Robinson – were passed over in the initial pick for the mystery improviser, Robin Goodfellow. For those not in the know, as a member of Buddy Daddy, Robin Goodfellow is an internationally touring improv star. He is also a dog. The McMeullers picked up JPR, much to the chagrin of Ben Masten, who was a little sad that he got picked last over a puppy dog.

The McMeullers came out of the gate swinging with a no frills, hilarious montage showcasing explosive improv chops. The Honey Boo Boo Children performed a terrific Toddlers and Tiaras-themed Close Quarters inside a prison. The troupe rose to the occaision in pageant worthy dresses, much to the chagrin of Ben Masten, who squeezed himself into a tight little red satin number that showed off his “figure.” Ben gets the prize of suffering the most indignity in the history of IFL. The Middle Schoolers roared back with a strong showing, featuring, among other things, a gigantic puppy erection. Despite having the advantage of going third, it wasn’t enough to overcome the McMuellers, who eked out a victory in the final vote count.

The McMeullers will be performing in the Semi-final Round 2 on Saturday, August 18th. The Middle Schoolers gained enough votes to take the lead in the wild card running. The runner up of next week’s IFL must get more than 15 votes to move on to the next round.

The next preliminary round happens this Friday, August 17th at 8:30pm and features SoCocoNuts vs. The Gathering of the Jollyville Juggalos vs. Payton Gin & Juice!