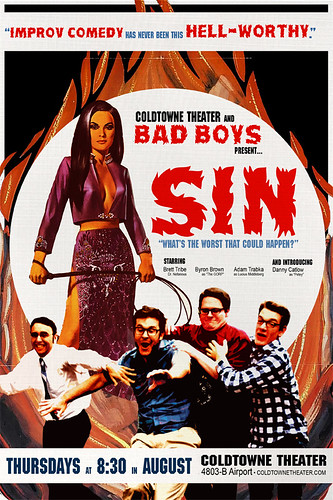 Thursdays at 8:30pm in August, join Bad Boys as they mine sin for all of the laughs it can yield.  What causes people to commit adultery? Overeat? Cut you off in traffic when you’re late to a movie? Bad Boys will get to the root of these daily transgressions and then blow them out of proportion to discover the laughter in what truly causes people to be awful to each other. You’ll wish all comedy could be this divine.

Featuring Byron Brown, Danny Catlow, Adam Trabka and Brett Tribe, Bad Boys started during the summer of 2010 and haven’t stopped, winning that Fall’s CageMatch Tournament and receiving a nomination for Outstanding New Troupe at the 2010 ColdTowne Theater Awards. Bad Boys improvise without a net, because they have each other.”Tickets here.