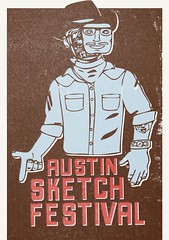 Memorial Day Weekend is fast approaching, and that means that the 4th annual Austin Sketch Fest is only three months away. We’ve got some more lineup announcements to make, and we’re not going to lie: we’re pretty pumped about these shows.

The Austin Sketch Festival raison d’etre is to bring together the very best of the Austin comedy community. Master Pancake, Your Terrific Neighbors, Stag Comedy, Tastemakers, Every Girl’s Annual, Unsuspectingly Sponsored By, Laugh Dammit, Austin Comedy Hour, An Historic Evening w/ Brendan K. ‘Grady and the Hustle Show will all be featured.

As confirmations roll in, we’ll have even more out of town guests and locals to announce. In the meantime, we’re releasing a second round of discounted Early Bird Passes good for all shows (PURCHASE THEM HERE). The first round sold out in minutes, so jump on this!

The Festival will take place at the Spider House Ballroom and at ColdTowne Theater. The full schedule and tickets for individual shows will be released soon.

The Austin Sketch Fest is produced by ColdTowne Theater, Austin’s home for live comedy, featuring more sketch, improv and stand up per square foot than any other venue in Texas.