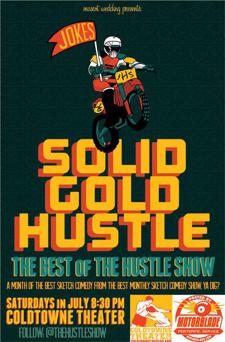 ColdTowne Theater’s smash hit comedy variety show, is coming back for a month-long victory lap. Every Saturday in July at 8:30 PM, The Hustle Show will perform a solid hour of their very best material. This ain’t the weak shit, son.

Brought to you by the finest gathering of Austin’s comedic minds this side of I-35, the Hustle Show cast features ColdTowne veterans, FPIA finalists, and members of Stag Comedy, Mascot Wedding, and Your Terrific Neighbors. Expect interpretive boogying, southern millionaires, the afterlife, and more. Come for the sweet laffs, stay because you’re too embarrassed to stand-up. I see you.