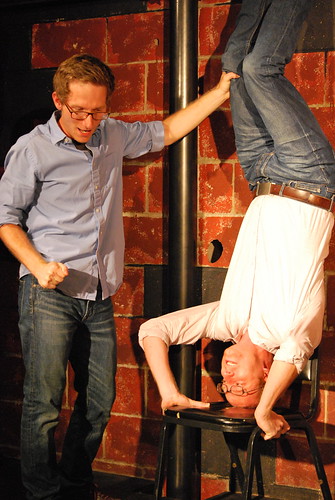 Once a week, ColdTowne throws two teams of comic gladiators into the pit and gives each of them exactly 20 minutes to claw their way into your heart. Desperation never smelled so sweet.

This is the improv show where your vote counts. For only five bucks, you can come make life-or-death rulings on the future of these doughty warriors! You’ll be drunk with power, and you know you like that.

The Cagematch has returned to its tournaments structure: Eight teams, seven weeks, and, as always, one winner! This fall’s tournament is called Pretty Pretty Ponies of Death, cause why not? Keep reading for the schedule!

Furiously Missing
Josh Bronson, Alex Dobrenko, Amy O’Connor, Cassidy Santaguida, Gloria Rabil, Shruti Saran
We perform narrative driven long-form improv that helps the audience remember what they’re missing
VS
What’s the Story?: Improvised Wishbone
Adam Trabka, Kristin Henn, Lacy Cox, Lizzi Leslie, Kate Bojanek, A.J. Holler, Steve
Ever since the television show Wishbone was canceled, the public has been clamoring for dog-starring performances of great works of literature. What’s the Story? will present to you great works of literature upon your suggestion, with a poodle in the lead role.

September 30th
Straight Men
Dave Buckman, Bob McNichol, Curtis Luciani, Lance Gilstrap, Nick Ramirez, Jericho Thorp, Katie Sicking, Valerie Ward
Based on the Straight Men show at the Del Close Marathon in New York- a show where everyone plays the straight man. A sort of one upmanship, where the goal is everyone for themselves trying to make themselves the straight man and everyone else crazy
VS
Best Friends Club of Austin
Joshua Phillips and Brett Tribe
Best friends usually come in exclusive pairs. Clubs are the most exclusive groups on earth. When you get The Best Friends Club of Austin, then you’ve got the most exclusive club of all time. See what this club of two has to offer and maybe, someday, you’ll be in it”