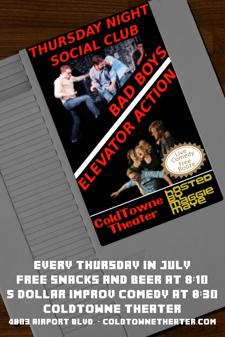 For the unaware, Bad Boys have garnered acclaim as one of the best improv ensembles working in Austin, playing to sold out houses across the city and inspiring audience reviews such as “everyone in the “Bad Boys” troupe wears glasses. They were also hilarious.” One of their members has become internet famous from a series of viral videos from the folks at Humordy.

Similarly, Elevator Action has been blowing up — though mostly in out of town markets. This Summer they’ve performed in Minneapolis, Dallas, New York City, and Oklahoma City. They’re not internet famous, YET.

Guiding you through this evening of high octane comedy excitement will be none other than Funniest Person in Austin Finalist Maggie Maye.