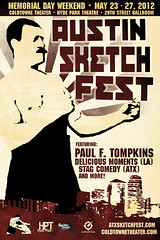 We are three weeks and a day out from Austin’s ONLY Festival — The ATX Sketch Fest! We’ve released a very limited number of All Fest Passes to the event, good for any shows save Paul F. Tompkins Crying & Driving Tour . Good news, however, because it’s entirely possible to purchase pass upgrades with tickets to the Paul F. Tompkins Shows!

The festival kicks off at ColdTowne Theater on May 23rd, with performances from the Encyclopedia Show, the Hustle Show and There’s Waldo. We continue May 24th and 25th at the Hyde Park Theatre with shows from the P! Company, Spirit Desire, Stag!, Ghetto Sketch Warlock, One Across, Astronaut Theatre (NYC), and Fantasy Sex Picnic (LA).

The weekend will be capped off at the 29th Street Ballroom with two performances from Paul F. Tompkins and a special appearance by last year’s festival darlings, LA’s Delicious Moments and Austin’s own Your Terrific Neighbors.